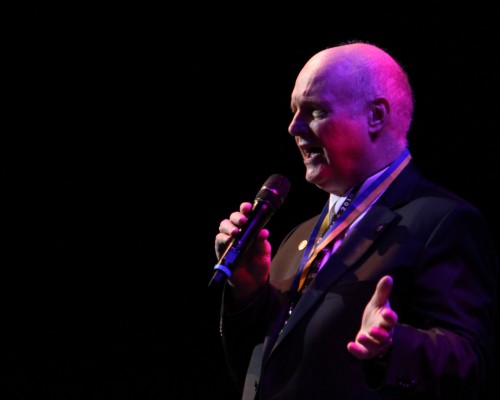 Oakville, Nov 23 – In a surprise announcement during the intermission of a benefit concert at the Oakville Centre for the Performing Arts, senior Rotary officials bestowed a prestigious award on musician and fellow Rotarian Ron Manfield, a Milton resident.

Manfield, who was in the middle of a concert to benefit Rotary’s fight against polio, along with the Ron Cary Orchestra and special guest Sharon Smith, was humbled by the award.

“Our concert was geared to entertain while benefitting the anti-polio initiative that has brought together Rotary Foundation, the Bill and Melinda Gates Foundation, the WHO and UNICEF,”

commented pianist, composer and singer Manfield. “I never expected this, but I am delighted to be a recipient of this prestigious award.”

The Paul Harris Fellowship was bestowed on Manfield on stage by Dr. Bob Scott, a past Vice-President of Rotary International, who has served for many years as Rotary’s world-wide ambassador in fundraising activities in support of Rotary’s fight to “End Polio Now.” In his role Dr.Scott has raised millions of dollars from world leaders around the globe in the fight to end the dreaded polio disease.

Crooner-pianist Manfield is touring with the Bob Cary Orchestra and Oakville was a final Canadian stop before the band moves on to Chicago and New York dates in 2015. Manfield, the owner of mpcmusic.com, is also producing a feature movie, All for Julie, based upon his song of the same name, which he performed for the Oakville audience, Sunday afternoon. 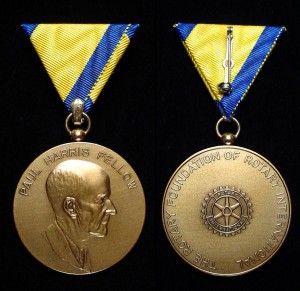