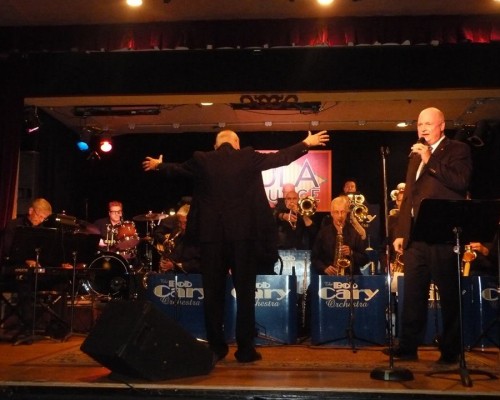 It was more than just an evening with a Canadian crooner. When Ron Manfield took the stage Tuesday night, May 22 at Lula Lounge in Toronto’s west end, the packed house was treated to a fresh approach to standards and an unforgettable original composition written for a screenplay.

Some 80 guests piled into the Lula Lounge dinner club drawn by Manfield’s talent and the big sound of the Bob Cary Orchestra, an 18-piece pit band that rocked the place.

Opening with a piano bar solo medley, Manfield serenaded the audience with such classics as “My Way” and “As Time Goes By.” The place really started to cook when the pit band’s big brassy sound, under legendary trumpeter and band leader Bob Cary accompanied Manfield as he ran through a recitation of well known standards, including “Crazy” made famous by Patsy Cline, “All of Me”, and Sinatra’s “That’s Life.”

However the highlight of the evening was Manfield original composition “All for Julie” a love ballad that Manfield told the audience is forming the basis of the story behind a dramatic feature screenplay he is producing of the same name.

The Lula Lounge, originally constructed in the 50’s as a movie theater, has the perfect ambiance for a cabaret-style production, with table seating that places the audience close to the performers.

Manfield reminded the audience that proceeds from the event were going to children’s charities and that the next concert in the series will take place at the Lula Lounge, on Tuesday, July 22.

One of the music scene’s best-kept secrets, Manfield, who lives in the Greater Toronto Area, is also a record producer who has worked with such local luminaries as Norm Amadio, Rob McConnell and Bobby Edwards who was Kenny Rogers’s Studio Staff Guitarist in LA.   Through his company MPC Music, Ron Manfield has involved himself in a range of community projects and charitable organizations.